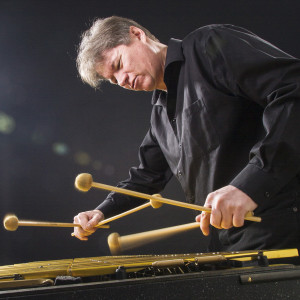 Kesecker has been delighting audiences with his masterful, inspired performances and sharing his knowledge and enthusiasm for the vibes and Jazz with countless students. San Francisco Chronicle staff writer Jesse Hamlin once referred to Tommy as “a cross between Milt Jackson, a Jamaican steel drummer and a Balinese gamelan player.”

At an early age, Tommy was captivated by the drum set and eventually began performing as a drummer at the Belrose Studio Theater in San Rafael, CA for its “Vaudeville Showcase,” backing a variety of acts, including world-famous comedian Robin Williams. Tommy commenced his formal study of the drum set with Cuz Cuzenuea, focusing on the rudiments of the “kit” and on Big Band Jazz. He was inspired early in his development by master drummers Buddy Rich and Louie Bellson, whose performances he attended when they came to town. Tommy’s exploration of drums was further fueled by masters such as Eddie Marshall, Eddie Gladden, Philly Joe Jones, Steve Gadd, Stewart Copeland, Peter Erskine and Eddie Moore.

While in a high school Jazz history class, Tommy was exposed to Eric Dolphy’s ground-breaking recording “Out to Lunch,” featuring world-renowned vibes virtuoso Bobby Hutcherson. That introduction to the vibes, along with eventual exposure to legendary vibraphonists Lionel Hampton, Milt Jackson, Red Norvo, Mike Mainieri, Gary Burton and Joe Locke, served as inspiration to refocus his energies on the vibes as his primary instrument. Eventually, Tommy acquired a xylophone and began his lifelong journey into the world of “keyboard percussion.” This led to lessons with Bay Area vibraphone master John Rae, who helped Tommy develop his improvisational skills, along with a hard-driving Bebop-oriented approach to the instrument.

In the early 80s, Tommy played drums with The Neighbors’ TOI (Twilight of Idols) and 17 Reasons. He went on to earn a Bachelor’s of Music Degree from the San Francisco Conservatory of Music in 1989. After graduation, Tommy joined legendary tabla virtuoso Zakir Hussain and the Rhythm Experience as a performer on Midi-Vibes and MalletKat percussion. In that ensemble, he was exposed to the frequent use of odd meters and compositions that emphasize percussive elements. The group afforded him many opportunities to play with internationally acclaimed musicians such as Don Cherry, Airto Moreira and L. Shankar. Since then, Tommy has performed on vibes, marimba and drum set with a diverse array of highly acclaimed musicians and bands, including pianist Larry Vuckovich’s Blue Balkan Ensemble, guitarist Jim Campilongo, saxophonist George Brooks, singer/actress Illana Parker, singer/entertainer Michael Feinstein, singer/pianist Diana Krall, actor/singer Joel Gray, Echo and the Bunnymen and Mannheim Steamroller. He played MalletKat and synthesizers with the group BoGo and contributed original compositions and his performance skills to “The Mallet Band” a fun “mallets-only” ensemble.

On the recording front, in addition to  his own recordings, Tommy appeared on “Crescent Boulevard” by Erik Jekabson, “Just What the Doctor Ordered,” by Joel Evans, two recordings by  Jazz Caliente, a group specializing in Latin and Brazilian compositions, and on recordings by Anna Estrada with Ray Scott. Tommy also appeared as a special guest on ‘Million Dollar Secret’ with the Johnny Nocturne Band featuring Kim Nalley.

When it comes to “the stage,” Tommy has been quite active, performing in the Monty Python musical “Spamalot,” the Mel Brooks production of “Young Frankenstein,” the theatrical presentation of “The Full Monty” and in presentations by the American Conservatory Theater (ACT). He has also played acoustic and electronic percussion, and drum set in countless musicals.

Tommy has been very active as a music educator, teaching in the Pre-Collegiate Department at the San Francisco Conservatory for over 10 years, in addition to having served on the faculty at the Berkeley Jazz School. He has performed in school-based educational presentation with ‘The Different Drums’ percussion ensemble and currently performs for young audiences in the North Bay Area under the direction of the Santa Rosa Symphony. Tommy is also committed to one-on-one instruction and maintains a thriving private teaching practice.